There really is a South Park, Colorado 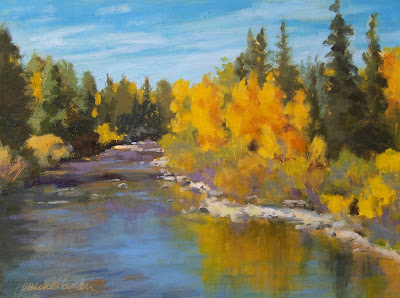 A "park" is a high mountain valley, and Colorado has three of them; North Park, Middle Park and the famous South Park. It isn't really famous for anything except the cartoon series named after it, but it is home to several small Colorado towns. The largest is Fairplay, and just north of there is a little town called Alma. An artist friend of mine, Cat Roberts, is opening a new gallery in Alma, and I will have some work hanging there. The River's Edge gallery is in a little historic building in a town where the largest store (if you don't count bars) is called Al-Mart. Alma is most known for having a cop car with a dummy sitting in it postitioned in different places in town during the summer, trying to get the tourists to slow down as they whiz through on their way to Breckenridge. Now it will be known for having a wonderful gallery too!

I thought it might be apt to have some river and fishing paintings in a gallery called River's Edge, so this will be one that goes there on Friday. It is 9x12, and an oil painting.
Posted by Joanne Hanson at 7:07 PM