No snow needed on opening day! 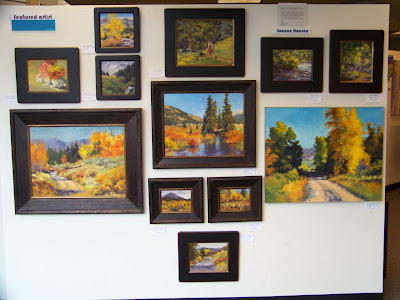 Here in Summit County, Colorado, it takes a lot of snow to keep us from doing things. We love snow and the ski resorts in the county, (Breckenridge, Keystone and Copper Mountain) depend on it. We have not had a lot of snow this season. In February, I usually have at least three feet in my yard, but this year I have perhaps a foot. Unlike most of you, when we hear that the forecasters are predicting snow, we cheer....except when I have the reception for my art show!

Not only did the date (always the Second Saturday of the month) fall on a holiday weekend when there are lots of tourists in town, it also snowed. Traffic was awful and the snow made it worse. As a result, the number of visitors to the gallery wasn't what I had hoped. I sent or gave out about 130 invitations and sent a press release to the local newspaper, and I had many people tell me that they would definitely be there. In fact, they were looking forward to it!

So it snowed. While the turnout was still better than average, I was disappointed as I knew it could have been much better. However, many people have since gone to visit the gallery and have commented favorably on my work. I took my camera that night, but of course, forgot to take any photos. I did take a couple of the featured wall display right after I hung it. A bit crowded, but we don't have a lot of space and I had a lot of work. This was one of two walls, but the one with the most impact as it was right by the front door.
Posted by Joanne Hanson at 12:51 PM