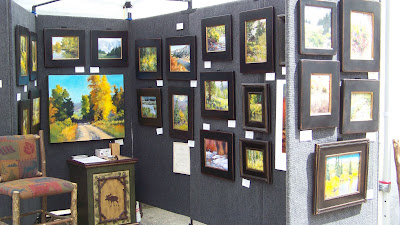 And I have a report on my new Caravan tent. While not as sturdy as a Light Dome or that type of tent, it is worth the money I paid for it. It is much less expensive than the Light Dome at just under $400, but still more than an EZup. I paid a little extra to have a steel frame instead of aluminum. For a person who does a couple of shows a year, it is very adequate. We had some really gusty winds at the end of the first day, and a couple of EZups lost their tops. People were hanging on to the frames for dear life to keep them from flying away too. I decided that not only did I need to attach my weights to the frame, but also to the canopy. There are a couple of D rings on the top of each corner of the canopy. I bought some more bungees and ran them from the canopy to the weights and after that we were very secure. Unless you have the extra bungees, the canopy is attached only with velcro.
My husband made the weights using PVC pipe and concrete. He made them fairly long, and they ended up weighing about 55lbs each. They are heavier than I wanted, but your weights really cannot be too heavy, especially when the winds pick up. We also had rain showers off and on the first day. Nothing more than a sprinkle, but still, enough to ruin frames. We had a corner booth and were also using the outside walls, so we would pull stuff in, then put it back out, and bring it in again, then put it out again.....several times. That night I picked up some clear plastic, taped it to the top of the outside walls and rolled it up so that we could lower it easily if it rained. Of course, it didn't, but hey, that is ok. That is an easy way to keep the rain away!
Posted by Joanne Hanson at 8:10 PM