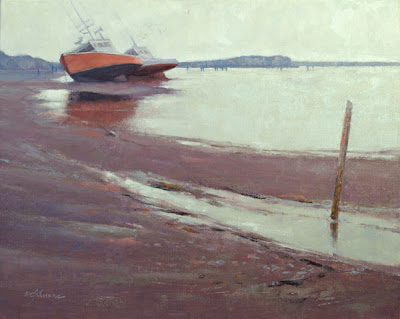 I wrote previously about a watercolor painting holiday in New Zealand in February 2012, just over a year from now. We are considering adding another week, working in oils this time, with Michael Chesley Johnson. Michael lives in Canada in the summer, Sedona, AZ in the winter and he teaches lots of workshops. He likes the idea of our relaxed itinerary in New Zealand and if we have enough interest, he would be willing to do it the week after we finish the first one with Adele Earnshaw and Joe Garcia. That would make it the first week in March, 2012, which in New Zealand, is late summer. A perfect time to be there!
The painting above is one of Michael's, not mine. He has titled it Low Tide at Friar's Bay, and I think it is one of his Canadian pieces. I lifted it (with his permission) from his website. New Zealand has similar scenery, with oceans and beaches, but we also have rain forest and pastures. It is a unique country, and one worth visiting. Let me know if you think you might have interest in joining us in New Zealand and I will send you more info.
Posted by Joanne Hanson at 4:48 PM