Making an easel for an artist 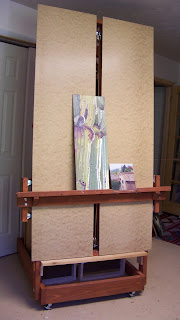 My husband is retired, lucky guy. He is playing with clay and wood these days. He likes to sculpt, but his most fun comes from figuring out HOW to do things, rather than actually doing them.
My sister has said for some time that she really needs a new easel, and what she would love to have is a counterweighted easel that will move up and down with just a touch so she can easily adjust the height of the piece she is working on. I came across plans for such an easel on Joshua Been's website a while ago, and Jim (my husband) decided he would like to build one for Adele. It looked pretty simple as it just took a few two by fours, plywood and some hardware, but turned out to be more complicated than we thought it might be. First, the easel is about 10' high and 4' wide. My sister only has 8' ceilings, so it needed to be shortened a bit. Second, the base was 4'x4', which takes up a lot of space, and all the plywood makes it very heavy. So Jim did a little modifying and ended up with and easel just under 8' tall and about 3' wide. The front of it has masonite on it rather than plywood and he left the base open to eliminate some weight. 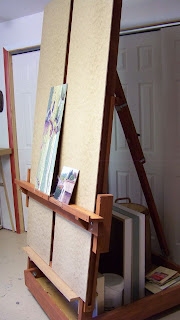 We drove it out to Arizona and unloaded into Adele's house. We hadn't told her about it yet, and she was thrilled to see it! She is the guinea pig and Jim is asking for suggestions to change the design and make it even better. She has already come up with a couple, which he implemented right away. One was to eliminate a portion of the lip on the tray that holds the canvas or panel in place. He cut out about 6" which now allows her to paint all the way to the bottom of the panel (handy for cradle board and gallery wraps) without the lip getting in the way. He didn't remove the lip entirely as it is needed to keep the canvas from falling off the easel. Second, because she sits to paint, she wanted a footrest, which he added at the bottom. She also wanted plywood in the base so that she could store stuff behind the easel and get it out of the way. I don't know of anyone's studio that has enough space for storage and hers doesn't either. He also had to add more weight in the back to make it easier to move the tray up and down. For that, he used nylon rope tied to round weights with a hole in the middle (free weights that you use while exercising).

Now she just needs to use the easel and give Jim suggestions to improve it further. He may make more easels, and thinks that perhaps he will use beetle killed pine that is so prevalent in our part of the Rocky Mountains. It is an environmentally friendly way to use unwanted wood. With this basic plan, he will be able to custom make each easel for the size of studio it is going in and the needs of the person using it.

Maybe my easel will be next! Do you have suggestions for the next one? I know as Jim makes them, each one will get better than the one before. I know Adele will have her input too!
Posted by Joanne Hanson at 9:57 PM