What to do with my failed paintings? 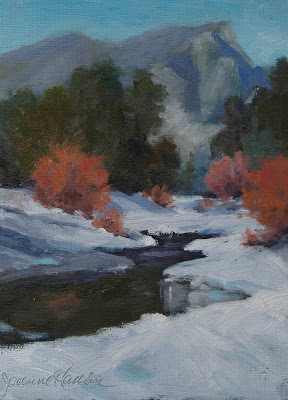 I have quite a few of them! I have been painting less than five years. As a beginner, I have lots of terrible paintings, but I have never thrown one away. Every so often I go through the pile just to show myself that I really have improved! My stack of panels is getting pretty big and I am running out of storage space. I usually use either Pintura panels or RayMar panels, so throwing them away is a bit difficult as I think about how much I have invested in them. This painting did not come from that pile, and it is one I just finished. I must admit part of it was painted twice though!

My artist sister, Adele Earnshaw, calls me at least once a year to tell me that she has found her perfect painting surface. A couple of years ago, it was a very nubby textured linen. That was it! Her masterpieces had a texture she really liked. Then it was gatorboard with clear gesso on it. I tried the clear gesso. It is a bit like painting on blotting paper. (Does anyone even remember what blotting paper is?). Next came Gessobord, her surface of choice for at least a year now.

Today she called me to say that she has now found the really perfect painting surface....old paintings! Ah-hah! I have a whole pile of old panels that will be able to be used again, but with a much better painting this time. Take a look at the one she did today, over top of an old painting of her own. Do you supppose years from now, a museum will be xraying it to see what is underneath?

Why would she like to paint over an old painting? Because it forces her to use thick paint and nice loose brush strokes. I guess I should give it a try myself. Perhaps I will keep a few of those failed paintings after all.....

Posted by Joanne Hanson at 6:32 PM